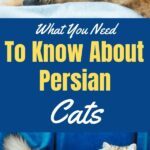 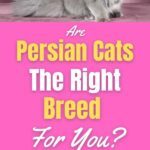 If you’re wondering what is a Persian cat you’ve come to the right place. Previously, we looked at the pros and cons of adopting one, and in this post you’ll discover everything you need to know about this beautiful breed of cat.

You’ll discover the history of Persian cats, variations of the breed, physical characteristics, health issues, and lots more. Surprisingly, there are different types of Persian cats from the cute doll face to the modern flat face that most people think of today.

Where do Persian cats originate from

The Persian cat is a very old breed and believed to have originated from Persia, or Iran as it’s known today. Back in ancient times, Persian cats were considered a rarity and of high value.

Only the very wealthy kept them as pets, in fact, they were much favored by the royal family. You’d never find anyone of poor means owning such a breed of cat.

It’s believed the Persian cat was first brought to Italy in the early 1600s by Pietro Della Valle. However, you’d also be interested to hear it’s believed this breed was introduced into Europe as far back as the 1500s by the Romans and Phoenicians.

It was in the mid 1800s that Persian cats were finally brought into the UK, and not until the late 1900s that they were introduced into the USA Up until the present day Persian cats have remained one the most popular breeds despite their high maintenance. In fact, it’s believed there are 100,000 in the UK, and around 20,000 in America

If you’re asking what is a Persian cat you’ll no doubt want to learn a little bit about physical characteristics. Actually, there are two main varieties of this breed. Traditional and modern.

Up until the 1950s, Persian cats had regular looking faces with large round eyes and snub noses. These are known as Doll Face Persians and considered far healthier than the modern flat face variety.

It was in the 1950s that selective breeding started producing kittens with flatter faces and shorter muzzles. Over time the shape has become more extreme resulting in a pug like appearance. Short noses and bulging eyes not only cause health problems but staining on the face as well.

This means extra work for the owner as not would you have to brush your cat daily, but wash her face as well! If you want a Persian cat that’s a bit easier to care for then a Doll Face is your best option.

All Persian cats have adorable large round eyes and small rounded ears. In addition, thick, fluffy tails and long, silky coats make this one of the most glamorous breeds around. This is a heavy boned cat with shorter legs than other breeds.

The body is stocky but sturdy and muscular. If you look at the paws on a Persian cat you’ll notice they’re large and round with tufted toes.

You may see the image of a white cat in your mind when you hear the word Persian. However, there are many different coat colors found including black and silver. In addition, you can also find shaded colors, tabby, bi-color, and patched.

Persian cats typically have copper colored eyes, though in rare cases you may find blue. As all kittens are born with blue eyes, eye color won’t be determined until after 6 weeks.

Black on any breed of cat is rarely solid black. If you look closely you’ll probably notice tinges of rust, as well as variations from root to tip. A black Persian cat can look stunning though, especially with bright copper eyes.

Red is used to describe cats with orange, ginger, mahogany or copper shades. A Persian cat with a dilution of red in the genes is known as cream, and those with grey coats are often referred to as “blue.”

This particular color became popular after Queen Victoria developed a love for them. Apparently, she owned several of these cats and was very fond of them. Silver Persians are known as Chinhillas and a famous example is the one that appears in a series of James Bond films! A feline companion to Blofeld, she was often seen sitting on his lap.

tabbies can be found with both classic and mackerel markings. Though tabby probably doesn’t come to mind when you think of a Persian cat, they are actually quite a popular variety of this breed. Known for being more extrovert in nature, they love play, and make excellent companions.

If you were to look at a tabby Persian cat you’d notice the familiar “M” on the forehead. All tabby cats have this marking and there are some fun legends surrounding it.

Classic tabbies have ring marks on the legs and tail, with markings that resemble butterfly wings on the sides and shoulder. In addition, black lines extend outward from the corner of the eyes. These often look as if the cat is wearing mascara!

Mackerel tabbies have similar markings except the patterns are made up of lines resembling fish bones. Also, there are a few other variations with with base colors including brown, cream and lilac.

Before considering a breed of cat it’s always good to know about the personality. Persian cats are known for their calm, laid back nature, and friendliness. In fact, they’re one of the most affectionate breeds of cat.

As they have low energy levels, Persian cats don’t need much exercise. They are quite content to lounge around on the sofa all day and make very quiet, peaceful pets. They can be vocal though, but not as much as the Siamese.

You need to think carefully before adopting a Persian cat as you’ll need to spend time grooming her each day. In fact, you should be prepared to spend about an hour each day to avoid mats and tangles.

This breed not only has long hair but a dense undercoat as well.
In addition, flat face Persians need their faces washed each day! As previously mentioned, they are prone to staining.

Unless you plan to show your cat there’s no need for bathing her. As long as you use a good brush such as a slicker you should be fine. In addition, a wide tooth comb is a useful tool for detangling and giving a nice finish.

As long as you provide clean fresh water and a nutritious diet for your furry friend, she will be fine. Persian cats don’t require any special diet, just quality food that contains essential nutrients. Some brands though such as Purina ONE offer hairball formula for adult kitties. This is a good choice for long hair cats such as the the Persian.

One thing you need to be aware of though is the potential for obesity. Due to their low energy and fondness for snoozing, Persian cats can easily gain weight. Just make sure you don’t over feed, and stick to the recommended daily amount.

Like many pedigree cats, Persians are prone to a few health problems. Some of these are down to physical characteristics, while others are genetic. Selective breeding to produce flat faces and snub noses is sadly responsible for respiratory conditions such as Brachycephalic airway syndrome.

This is a condition caused by narrow airways. It makes breathing harder and the only cure is surgery to correct the problem. In addition, other deformities can include excessive skin folds on the face. In some cases, bacterial infections can occur in the folds, resulting in dermatitis.

Cleaning your cat’s face daily is the best way to avoid this problem and should also include wiping around the eyes. This is because many flat face Persian cats suffer eye discharge. Tear ducts unable to drain properly as a result of facial deformities often cause discharge. If this is left, staining can occur.

As well as the problems mentioned above, shorter muzzles can also cause jaw deformities. This has a major impact on teeth with misalignment making it hard to chew properly.

As you can imagine, this can easily result in dental disease. Inflamed gums from trapped food and decay are common problems your Persian cat may well experience.

If you get a Persian kitten, it’s important to start cleaning her teeth at an early age. Dental hygiene is important in all breeds of cat, but even more so with Persians, and others with flat faces.

Though not caused by selective breeding, this is a genetic disease. It’s commonly found in certain breeds of cat including Persian, Chinchilla, and exotic shorthair cats.

It can be managed successfully but tends to worsen with age. In fact, symptoms may not even show until your cat reaches senior age.

Where can you get a Persian cat?

Now you know what is a Persian cat you may feel tempted to get one. Before making a final choice however, you may want to read my recent post outlining pros and cons of adopting a Persian cat.

You can either choose to visit a local breeder or contact a rescue center. Sadly, pedigree cats end up in shelters if their owners can’t manage them or afford the cost of veterinary bills.

If you live in America, petfinder or adoptapet may help you locate a breeder. If you live in the UK The Cat Breeders Association is a good starting point.

Always make sure a breeder is genuine before signing any documents or handing over cash. There are plenty of genuine breeders who love animals, but also a few unscrupulous ones as well.

If you’re not allowed to see the mother and kittens for any reason, don’t hang around. In fact, I’d even suggest reporting them as you don’t know what conditions the animals are kept in.

If you want to show your Persian cat you’ll need to find one that meets show standards. In addition, you’ll have your work cut out with extra grooming and preparation. However, you’ll get to meet other cat enthusiasts and even make some good friends!

I hope I’ve helped you understand what is a Persian cat. There are so many different breeds but Persians have that special something about them. As you now know, there are a variety of coat colors and markings to be found.

If you’re like me, it wasn’t long ago that I thought all Persian cats were white. I think the James Bond films with Blofeld and his cat come to mind when many think of Persian cats!

As you can see, this breed is quite high maintenance and will demand some of your time each day. You also need to consider that this is a breed best kept indoors. I rarely suggest keeping a cat inside unless for good reason, but due to the friendly nature with strangers they are a target for theft.

Wishing you a purrfect day:)