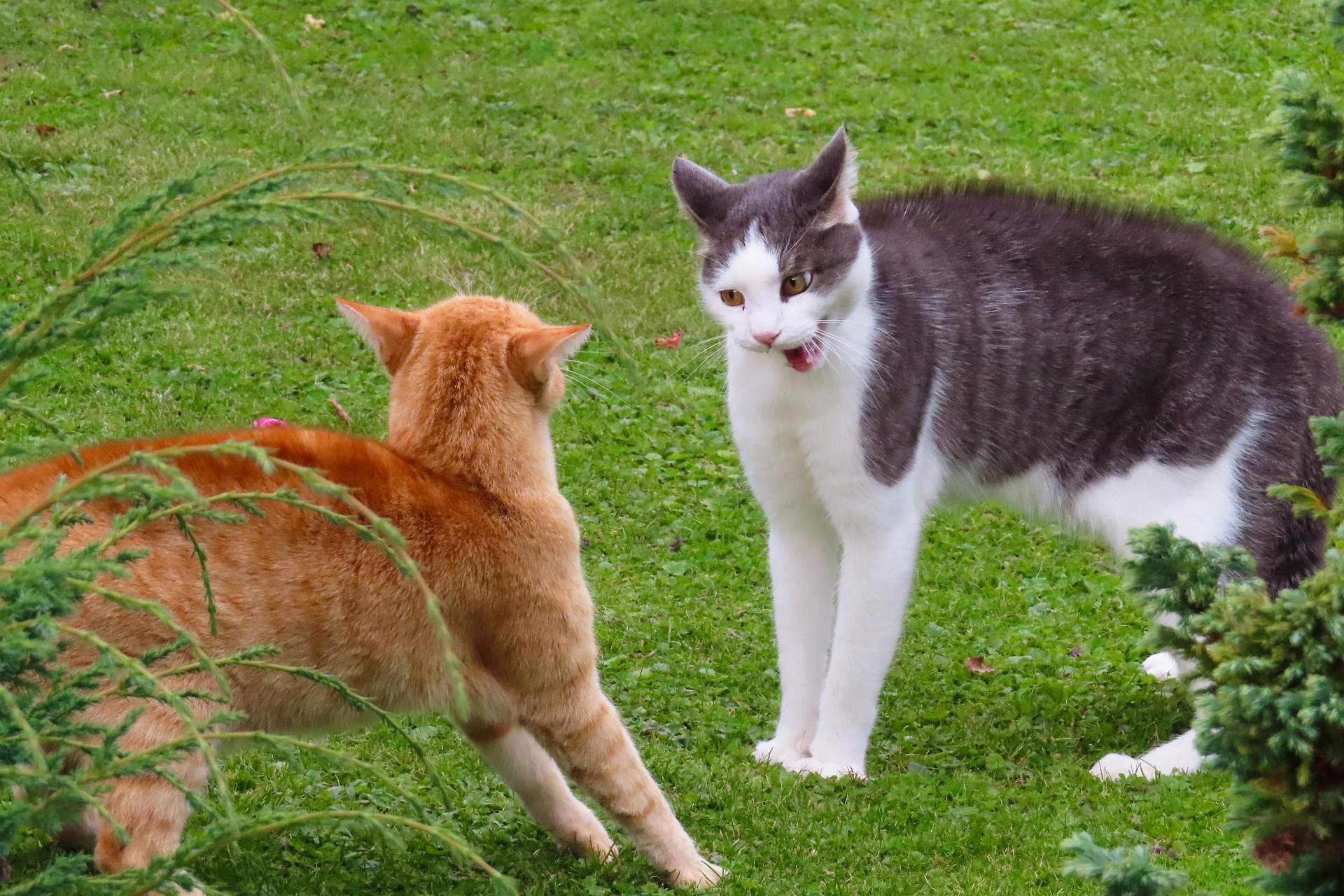 If you have a multi-cat household you may want to know how to stop your cats from fighting each other. I grew up with multiple cats in my home, as my parents took in 2 stray kittens. Added to which, I also introduced another cat after moving back in following a divorce.

Despite 3 cats sharing one home, they all seemed to get along most of the time. We even had a mynah bird as well, and the cats somehow knew he was part of the family. Of course, there were fights and scuffles, but they were short lived. It seemed each knew it’s place and we’d often find several cats curled up together!

Just like people though, not all get along well, and you may find arguments breaking out between your furry felines. It can be disheartening to see your precious fur babies at war with each other and wonder how you can stop their fighting.

In this post you’ll discover common reasons why cats fight, as well as solutions that may help. As your furry family can’t talk you have to work out the cause of their disagreement yourself.

One of the most common reasons cats fight each other is over territory. This is especially common with unneutered males once they reach maturity. Females can be territorial as wel,l claiming what they believe is theirs. Strangely, females are often the ones ruling the roost in a multiple cat household. You could easily compare this with humans where women are often seen to be the ones in control at home!

Indoors, your cat’s perceived territory may only be a small area which could be a favourite sleeping place, or even the sofa. Outdoors, it will be a larger area covering a patio or garden. While cats don’t usually roam far, they will encounter other felines from time to time.

Sometimes you’ll find your kitty making friends with outsiders, and allowing the odd feline to share her space. Members of her own family won’t usually have any problems sharing outside territory though, apart from the odd squabble!

However, indoors it can be a pain trying to stop your fur babies fighting over who sleeps in the cat bed or corner of the sofa! This is perfectly normal behaviour and a way of establishing a hierarchy.

Your cats will mark their territories with scent. This may be rubbing their cheeks against an object, or in some cases, spraying! Understanding why cats spray and how to stop it is useful information for any owner of unneutered males!

You can try and discourage territorial behaviour in the home by rearranging furniture. Breaking up large spaces can work in some cases. However, they’ll probably define new territories for themselves!

How to stop your cats from fighting over jealousy

Could one of your cats be jealous of something? Jealousy is an emotion identified with humans, but it’s also possible our feline friends may experience it as well. Many cat parents ask “do cats have feelings?” and are quite surprised by the answers. A new baby or new pet can take up a lot of time. Your kitty may feel resentful and left out. With multiple cats in the household you may find one taking it out on another. A bit like stroppy teenagers!

It can take a while for things to settle down with a newcomer, but always make a fuss of your cats. Let each one know they’re loved by spending a few minutes every day playing and cuddling them. Always introduce a new cat gradually. Never leave all cats alone in a room together until they’ve got used to each other’s smell. You don’t want world war 3 breaking out in your absence!!

Some breeds of cat such as siamese are very needy and easily made to feel insecure. If your kitty suspects she’s getting less love than the newcomer she may take it out on the other cat. Never give one of your cats more love than the others. You may do this without realising it, especially if you’re being protective towards the cat that gets attacked.

It never ceases to amaze animal behaviourists just how intelligent felines are. They’re fast learners quickly picking information up and acting accordingly! If the aggressor feels he’s being short changed with affection, chances are he’ll take it out on the cat you’re trying to protect.

What you need to do is give the aggressive kitty extra love and cuddles as well. Nothing goes unnoticed with cats, so don’t try and fool them, as it will only backfire!

How a visit to the vet leaves it’s mark!

A trip to the vet will leave a strange scent on your cat. If you have other cats in the home, they’ll sniff your poorly kitty and pick up on the aroma. You can’t do anything about that as cats pick up on smells you or I would never detect. Keeping your kitty in another room for a few hours may help. Gently rubbing the other cats with a small cloth, then rubbing your affected feline with it is another idea. This transfers familiar scents that may help mask any others.

Could changes in your routine cause your cats to fight?

Cats are creatures of habit and any change in routine can make them stressed. It’s quite possible even being away from home for a short while can cause anxiety. Stresses can easily trigger aggression in cats, making your furry family turn on each other. Of course you can’t stop going on vacation, or taking business trips, but you can make their environment as calming and peaceful as possible.

Having a pet sitter look after your cats is a far better option than putting them in a cattery. Ideally, someone who’s familiar with your feline family and can be trusted.

Try and make sure your sitter knows their daily routine and try to get him or her to stick to it. For example, feeding times should remain the same. Also, let your pet sitter know how important play and interaction with the cats is. You’ll have less chance of aggressive fights breaking out if your cats are calm and happy.

Why do my cats lick each other then fight?

Grooming is a very intensive and ritualistic part of your cat’s waking hours. It can seem almost obsessive at times and all felines do it. However, it’s also an important part of the bonding process between cats, and is known as social grooming.

If you have several cats in your home you’ve probably watched them groom each other lovingly. Then, suddenly, for no apparent reason, one starts smacking or biting the other.

It can seem upsetting to watch, but there’s usually very little to worry about. The cat being groomed has simply had enough and not afraid to let her companion know!! The fact your cats happily groom each other means they have a close bond.

You may find the more dominant kitty in your home does the most social grooming. It seems fairly common for a dominant cat of either gender to groom a less confident one. It’s almost like some type of social status within the group.

What is play fighting between cats?

Cats in the same social group will often play fight. There’s no hissing or screaming, but plenty of chasing, swatting and pouncing. It usually ends as suddenly as it started with both cats quickly calming down. This is normal behaviour and means your fur babies are getting plenty of exercise.

If playing escalates into an aggressive fight you’ll soon know. If you see your kitties with Ears flat against their heads, bushy, fluffed up tails, and staring at each other with fixed stares a real fight is imminent! It could be a disagreement or frustration causing them to take it out on each other.

Keep a water spray handy as it’s a good tactic for breaking up a cat fight. They hate water and will soon stop attacking each other! This is a very gentle and effective method that’s guaranteed to work. A water bottle with spray nozzle for plants is best.

If you see your cats engaged in fighting it’s tempting to grab hold of one to break up the fight. Don’t!! You could be badly injured. Never shout at or hit your cats either. You’ll end up scaring them, causing more stress and anxiety.

Other effective ways to break up a cat fight

Another effective method is distraction. Rattle the treats box, clap your hands, or shake a favourite toy. Anything to get their attention quickly and stop the fight is great. If you find discord between your feline friends is a problem, consider installing a Feliway diffuser. This has a calming effect on cats ,reducing stress.

Is an outsider picking fights with your cat?

Even if you only have one cat you may still have the problem of cat fights. If your kitty goes outside she’ll probably come across a neighbour’s cat or the odd stray passing through. Cats often allow another cat to share their territory if they become friends, but a feisty feral or aggressive kitty from next door could be picking fights with your kitty and making her life very stressful.

Keeping her indoors isn’t always the best solution as it can lead to more stress. It wouldn’t be fair or acceptable to ask your neighbour to keep her cat in either. If you hear fighting, just walking outside is enough to break things up! Using a water spray or clapping your hands will also work.

Just as you wouldn’t want to share your food dishes with others, neither do your cats. The same goes for beds and litter boxes. A good idea is to allocate each of your cats their own space. Provide a bed, litter box, food and water bowls for each. Of course this may be impossible if you have 10 cats!!! However, cats do need private space otherwise it tends to cause tensions.

Now you know how to stop your cats from fighting each other, I hope you see the importance of keeping your feline family happy. While you can’t stop the occasional squabble over a toy or fallout over something that would never register with you, you can ensure their happiness and wellbeing. By following the simple tips outlined in this article you can reclaim a peaceful home!

Keep in mind that sudden unexplained aggression may also be the sign of a health problem. Always get your cat checked out if she or he suddenly becomes aggressive towards other cats or you.

If you’ve enjoyed reading this post please share. I’d also love you to share any experiences you may have with cat fights, or ask any question if you have one. Please feel free to leave your comments below

Category: Understanding Cat Behaviour
Tags: how to stop your cats from fighting, stop cats fighting, why do cats fight each other

16 thoughts on “How To Stop Your Cats From Fighting Each Other?”